The Graduation Ceremony for students from Kuwait 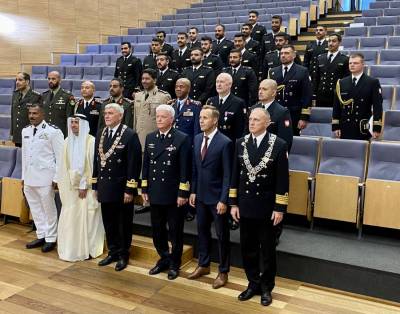 On Friday, August 12, the Graduation Ceremony of Kuwaiti cadets was held in the Auditorium of the Main Library of the Polish Naval Academy.

17 students of the Faculty of Navigation and Naval Weapons left the walls of the Polish Naval Academy in Gdynia. The ceremony was broadcast online on AMW's You Tube channel. (https://www.youtube.com/watch?v=IdXJYWM_-Pw)

During the ceremony, the banner of the Naval Academy was introduced, followed by the performance of the National Anthems of the Republic of Poland and the State of Kuwait. The students were handed the diplomas and graduate's sword.

The Rector-Commandant Rear-Admiral Professor Tomasz Szubrycht, PhD, DSc Tomasz SZUBRYCHT, during his speech, expressed his congratulations and wished all the success and good luck to the graduates from Kuwait. He summarized the 4 years of study, pointed to the essence of studies at the Polish Naval Academy in Gdynia and emphasized that the Kuwaiti students were an important element of the entire academic community. In your home country you will perform difficult tasks, you will be ready to defend your country ...said the Rector Commandant. At the same time, the Rector Commandant expressed his heartfelt thanks to his superiors and numerous families who came to the ceremony.

The best graduate placements were:

Among the invited guests at the ceremony were: Ambassador of Kuwait in Warsaw, His Excellency Khalid ALFADHLI, Kuwait Defense Attache in Berlin, General Adnan AMER, Commander of the Coast Guard of Kuwait, General Talal ALMOUNES, Inspector of the Navy of the General Command of the RSZ, Vice Admiral of the Military Jakub MYKOWSKI, representatives of units and institutions of the Ministry of National Defense, academic community.

The commander of the ceremony was Commander Lt. Łukasz TELEGŁÓW.

After completing their studies at the Naval Academy, the cadets also received a watch officer certificate in addition to their graduation diploma. The culmination of today's ceremony was the unveiling of the commemorative plaque of the yearly "Promotion 2022". Foreign students have become a permanent element of the landscape of the Polish Naval University and the whole region. They actively participate in scientific and cultural life, participate in holidays and celebrations prepared by the local and military environment.

We wish the graduates good luck and success in their further military service, successful winds and contacts with the AMW.

Published in News
More in this category: « The Delegation from the National Institute of Political and Strategic Studies of Nigeria
back to top