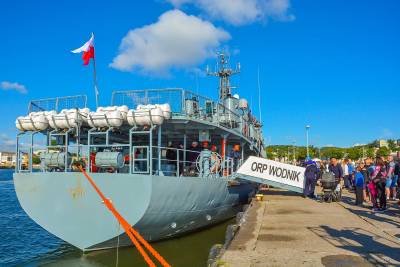 After almost 2 months at sea , on Saturday, August 7th ORP “Wodnik” got back to the home port. The crew was Polish, Qatari and Kuwaiti midshipmen and it was a first such long sea journey for all of them.  They sailed several thousand sea miles at sea and ocean (the Baltic Sea – the North Sea – the Atlantic Ocean – the English Canal – the Baltic Sea), visited several foreign ports (Funchal-Portugal: Funchal; the United States: Miami and New York; Canada: Halifax) but-most of all-practiced difficult marine craft.

Polish and Kuwaiti cadets from Faculty of Mechanical and  Electrical Engineering – future naval ship`s mechanics – did  the specialistic practice. They learned different  naval ship`s devices: the documentation and service. They also were a part of a watch in marine power plants. They also learned some issues connected with a naval ship command and control.

Also, during the voyage, cadets took life-saving training and Polish midshipmen - according to a long tradition -  were “baptized at sea”.