Visit of the Ambassador of the Islamic Republic of Pakistan 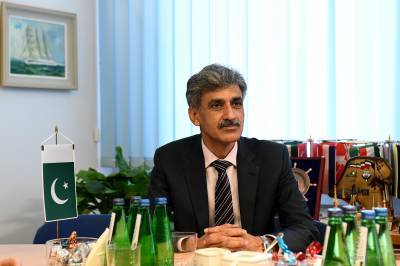 On Thursday, February 17. 2022 a working visit to the Polish Naval Academy was paid by the Ambassador of the Islamic Republic of Pakistan, Malik Muhammad Farooq. The purpose of the visit was to familiarize the ambassador with the educational process, educational offer for foreign military students and the infrastructure of the PNA.  During the meeting, the possibilities of developing cooperation in the field of educating students of the Navy and Coast Guard of Pakistan, as well as the implementation of joint research and industrial projects were discussed. Pakistani Navy is served by about 25 thousand people. It is equipped with 7 frigates, 2 corvettes, 8 missile ships, 5 submarines and 8 landing ships to deploy a maritime unit of 3,200 soldiers. The Navy's special operations group is equipped with t. Chaser TM - 1226 combat boats built in Poland. The naval forces are supported by the marine aviation. In addition, the Pakistani Coast Guard is equipped with 4 Open Sea Patrol Units (OPV). It is worth mentioning that the relations of military cooperation with Pakistan are dated back to the period after the Second World War. At the invitation of the newly created state of Pakistan, in 1948 Polish pilots demobilized in England provided support in the creation of its Air Force. Among 30 Polish pilots was Władysław Turowicz, technical inspector of military aviation and air accident. He came to Karachi in 1948, quickly laying the organizational and technical foundations for Pakistan's military aviation. He retired in 1967 with the rank of general in the Pakistan Air Force. He educated all senior commanders of the Pakistan Air Force. Then he worked on developing a rocket program and space cooperation with NASA. His wife, Zofia Turowicz, was a glider, military pilot (on liaison planes) and a Pakistani youth parachute instructor. As an example of respect and recognition for Mr. and Mrs. Turowicz, two marshals of the Pakistani Air Force (Air Marshal) participated in the ceremony at the Embassy of the Republic of Poland in Pakistan to award Mrs. Zofia Turowicz with the state decoration.

The distinguished officer of the Polish Navy also entered the annals of the history of the Pakistani Navy. Rear Admiral Romuald Nałęcz-Tymiński worked as a contract officer in the Pakistani Navy in 1951–1958, where he was the commander of a destroyer and destroyer flotilla with the rank of commander. However, during the Second World War, Islamabad sheltered over 21,000 Polish refugees evacuated from the USSR along with the army of General Anders. Ambassador Farooq is making efforts to ensure that one of the main streets in Islamabad be named after General Turowicz. We invite you to view photos from the ambassador's visit.

Published in News
More in this category: « The visit in Qatar The Delegation from the National Institute of Political and Strategic Studies of Nigeria »
back to top