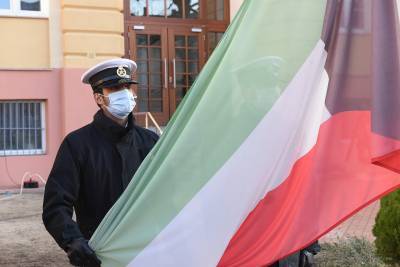 On Thursday, February 25th, 2021, the formal assembly was conducted at Polish Naval Academy for National Holiday of Kuwait. The flags of Kuwait and Poland were raised, the national anthems were played and the commemorative order were read.

Let`s show a bit of a historical overview of this country on this occasion.

From the VII century the grounds of today`s Kuwait were within Arab-Muslim caliphate. In the XVIII century the refugees from today’s Saudi Arabia territory built a Kuwait city. Between 1899 – 1961 Kuwait was a British protectorate. From 1961 Kuwaiti people started to implement local rights and little by little take over the country from British. June 19th, 1961 the country were given independence after signing an agreement with Great Britain,  receiving military guarantee at the same time.

August 2nd, 1990 Kuwait was invaded, conquered and included in to Iraq as another province. Kuwait regained the authority almost a year later, February 25th, 1991, after the international intervention lead by the United States known as the Desert Storm operation. To honor the day Kuwait celebrate the National Holiday.

It is worth to mention that Poland played a part in the Desert Storm operation with ORP Wodnik – school warship-was a hospital worship and ORP Piast was a  lifesaving warship.