OFFICERS PROMOTION AND THE GRADUATION CEREMONY FOR POLISH AND FOREIGN CADETS

OFFICERS PROMOTION AND THE GRADUATION CEREMONY FOR POLISH AND FOREIGN CADETS 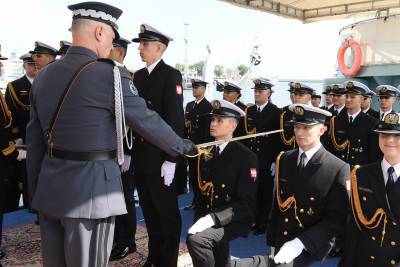 On Friday, August the 30th 2019 the ceremony of officers promotion for Polish cadets along with the graduation ceremony for Qatari and Kuwaiti students  took place on historical destroyer, the ship-museum Błyskawica. 35 Polish graduates was promoted to the first officer degree - Ensign while 25 foreign cadets received from the Rector-Commandant an officer dagger a s a souvenir marking the graduation from Polish Naval Academy in Gdynia.  The act of promotion for Polish cadets was executed by the I Deputy Chief of General Staff of  the Polish Armed Forces, Lieutenant General Michał Sikora. The honourable guests at the ceremony were His Excellence Ahmed Almidhadi – the Ambassador of Qatar State, His Excellence Khalid Alfadhli – the Ambassador of Kuwait. Also admirals, generals, ministry and invited quests graced the ceremony with their presence.

According to the ceremonial, the first given the officer`s rank was the top student cadet Mateusz SOBOLEWSKI.

I Deputy Chief of General Staff of  the Polish Armed Forces, Lieutenant General Michał Sikora read the letter of the Minister  of National Defence Mariusz Błaszczak directed to newly promoted officers. The Rector-Commandant also, in his speech, congratulated not only to the newly promoted officers, but also to their proud parents and families. All the officers were given from the Rector-Commandant`s hands the officer daggers, which they will wear with their formal uniforms from now on. Also the officers with I, II and III placing were honoured: the Ist- Mateusz Sobolewski-were handed a reward granted by the President of the Republic of Poland-  Honourable Cutlass of Polish Navy, the IInd-Konrad Skwierawski-received the prize from the Minister of national Defenca and the IIrd-Katarzyna Garus-received the prize from the Rector-Commandant of Polish Naval Academy.

After the promotion of Polish cadets on board of the ship entered foreign cadets from Qatar and Kuwait to take part in the ceremony of graduation of the Ist degree studies. The Rector-Commandant also favoured  the best cadets. The Ist student was Jarrah Al-Mansour from Kuwait, the IInd was Dhubaibi Al-Dhubaibi from Kuwait and the IIrd was Humaid Al-Hemaidi from Qatar.

The day before, on Thursday, the 29th of August, there was a graduation ceremony for Polish, Qatari and Kuwaiti cadets. It was held at the Polish Naval Academy in Gdynia. For the best Ist, IInd and IIIrd placing were awarded:

-Mateusz Sobolewski with the gold-plated ring of the graduate of military studies;

-Konrad Skiwerawski I Katarzyna Grus with the ring of the graduate of military studies;

For the best results in studies distinguished were: Patrycja Angel, Maciej Wilk and Szymon Leszczyński.

The essential element of being a Polish Naval Academy cadet is also a non-duty activity. According to this  Dawid Pianka, Katarzyna Garus and Katarzyna Łosicka were distinguished for their involvement in work for Student Council and other different organizations.

The ceremony of handing over the diplomas of the completion of military studies 2019: https:// www.youtube.com/watch?v =

The Officer Promotion and the ceremony of the Foreign Cadets graduation: https:// www.youtube.com/watch?v = 2UnSJRDPhkM last military

Published in News
More in this category: « PNA as a co-organizer of Consortium Partnership for Peace project Doctor Honoris Causa for the Rector-Commandant rear-adm prof. Tomasz Szubrycht »
back to top