PNA as a co-organizer of Consortium Partnership for Peace project 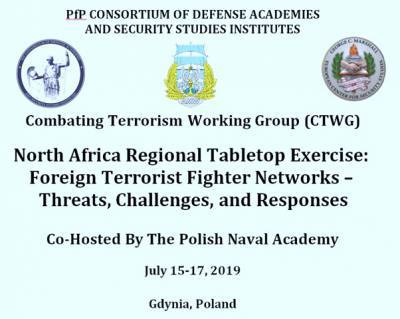 On July 15th 2019 in the Polish Naval Academy in Auditorium A named after Cpt. prof. Józef Urbański  the Combating Terrorism Working Group (CTWG) PfP Consortium will begin 3 day exercises called „North Africa Regional Tabletop Exercise:  Foreign Terrorist Fighter Networks – Threats, Challenges, and Responses”, which is being organized by PfP Consortium of Defense Academies and Security Studies Institutes and George C. Marshall European Center for Security Studies from Garmisch-Partenkirchen, Germany. The PNA in Gdynia is the co-organizer of this event.

The reasons to conduct this exercise are the threats resulting from successively decreasing territory of  Daesh (the pejorative term for Islamic State in Iraq and Syria) as well as freedom of movement of people in Iraq and Syria. Both distant and close from the area of fights countries are facing growing concern connected with returning and penetrating of foreign terroristic fighters. Another threat for the safety of the region is the situation in Northern Africa and Sahel (the geographical region of south Sahara borders and northern borders of  more humid Sudan) where many terroristic organizations, like fractions of Daesh and Al-Kaida, are seeing the possibility of keeping the area unstable when it comes to the international safety. Fighting with increasing international threats requires borders to be safe, information to be exchanged, agencies to cooperate as well as international cooperation when it comes to fight terrorism in the safety sector.

The purpose for the project is to conduct the CTWG exercise type “table-top excercise”  (TTX). TTX goal is to recognise the blanks in current strategies for fighting terrorism and  plans of action, to work on recommendations which allow to solve identified problems and to export the best practises among experts in fighting terrorism form Europe, North America, North Africa and Asia.

There will be 62 experts from 24 countries attending the conference.

Published in News
More in this category: « Brussels Summer School for Young Leaders. EU as a Global Actor. OFFICERS PROMOTION AND THE GRADUATION CEREMONY FOR POLISH AND FOREIGN CADETS »
back to top