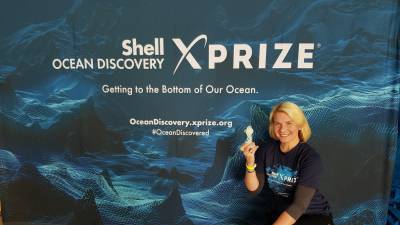 "Shell Ocean Discovery XPRIZE" has been won by the GEBCO - NF - ALUMNI team with participation of lt. Karolina Zwolak - lecturer of the Navigation and Maritime Hydrography Institute, only one Polish citizen taking part in the competition. The main goal was creating a map of maritime buttom lying 4 km under the surface using autonomous and remotedly operated surface and submerge vehicles. The designated area to be scanned was covering 500 sq. km. The team had to prepare a map representing minimal resolution 5X5 m, covering at least 50 % od the area within 24 hrs. Final measuring process took place in November and December 2018. The ceremony of the results announcment was organised on the 31 of May 2019 in Monaco - Oceanographic Mueum, The second place took the team from Japan and aditional award was taken by the British team.

Published in News
More in this category: « METOC FOR MIDSHIPMEN 2019 Midshipmen practice in Sweden »
back to top