Competition on IHL for Military Academies

Competition on IHL for Military Academies 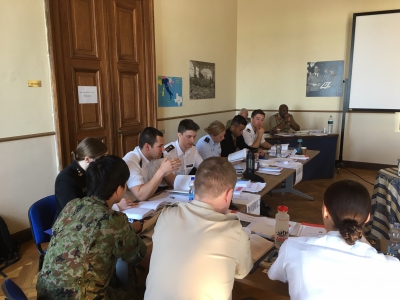 At the end of March 2019 (25-29) the 18th edition of the Institute’s traditional and prestigious IHL Competition for Military Academies took place in Sanremo, Italy.
This event exposes young military cadets, coming from all over the world and hence possessing different cultural and linguistic backgrounds, to a unique international forum.

Participants are encouraged to acquire an early appreciation of the critical importance of IHL in a multinational military operation and its application within the context of a contemporary armed conflict. An initial phase of interactive lectures on various aspects of IHL was followed by practical sessions where the participants were split up into multi-national mixed teams to work on practical cases of relevance to the application of IHL in different operational scenarios.

PNA as the only Polish university participated in the competition for the second time. The previous one was in 2007. The participants were divided into international 3- or 4-person groups which wrere then organized in four independent joint military staffs solving the humane rights problem. The PNA representatives were: Chief Petty oficer cadet Katarzyna Garus, Chief Petty oficer cadet Arkadiusz Kot and seaman cadet Sylwia Grzeszczyk. The team was trained by Dr. Jarosław Kroplewski. Along with the competition there was a conference about the national systems of the education at military academies including education and training systems in the range of the international humane right. The last but not least important issue is for the participants to learn how to work in multicultural groups of people.